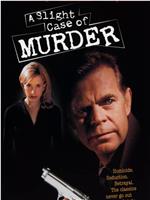 A Slight Case of Murder

A film critic accidentally kills his lover during a spat in which she falls and hits her head. In panic, he immediately covers up his involvement and leaves the apartment. A private investigator had been tailing the woman for her ex-husband. Realizing what happened, the investigator launches a blackmail scheme. The critic turns the tables after the investigator turns in his rep...